Review: When The Killing's Done by T.C. Boyle 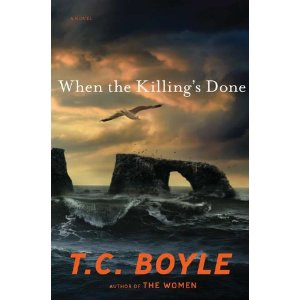 One of T.C. Boyle's great gifts is to take subjects that would slide into polemic in most writers' hands and write about them even-handedly and dispassionately, reserving the force and intensity of his language for his characters and story rather than the ostensibly political topic at hand. Moreover, when his so-inclined characters launch into their jeremiads, you never get the sense that the author is on his soapbox, undermining the whole enterprise. On the contrary, Boyle's characters gain credibility and identity in these moments, rather than sacrificing them at the altar of the author's misguided desire to use them to speak his own mind.

Boyle has written the occasional, seemingly topical book—that is, stories that concern politically charged topics, such as The Tortilla Curtain, about the clashing lives of an illegal immigrant couple camping in Topanga Canyon and two gated-community middle-class liberals, which never dodged the volatility of the issues surrounding illegal immigration but mused, ultimately, on the complexities of realizing the American Dream, and the inevitability of frustration and hypocrisies great and small in the face of it.

Boyle's newest book, When the Killing's Done (Viking Press, due to drop February 22, 2011), focuses on the cataclysmic clash of two mighty wills (and two somewhat lesser ones) on opposite sides of a bitter ideological divide. Alma Boyd Takesue, a National Parks Service biologist spearheading the extermination of invasive species that are attacking the native animal populations of the Channel Islands off the California coast, goes 15 rounds with Dave LaJoy, an animal rights activist determined to stop the killing at any cost. The root of the problem is several centuries of intrusion by the original invasive species—human beings—whose occasional habitation and efforts to farm and raise livestock and hunt and vacation on Anacapa and Santa Cruz have compromised the ecosystems of these wild and sparsely islands located 2–3 hours by boat from Santa Barbara. The Parks Service's goal is to remove rat and feral pig populations before they kill off indigenous species that evolved there by natural—or at least prior—means. It's a scientifically logical plan but also a brutal one, the first project involving poisoning thousands of rats en masse, the second carried out in part by importing expert hunters from New Zealand to entrap and shoot 5,000+ pigs. There's certainly a reasonable ecosystem-restoration argument there. But given that the preservation of some species (such as the native fox population) involves the extermination of others, ask LaJoy and his folksinger girlfriend and fellow activist Anise Reed, who or what gives the Parks Service the right to make those arguably god-playing calls?

What makes When the Killing's Done such a gripping tale is that it's not about choosing a side, or determining who gets to live. Ultimately, it's about how life can get in the way of righteousness (and how funny and infuriating it can be when it does), how the notion of what's "natural" in our world or ourselves defies any attempt at rational reduction, and the hubris of humans who try—especially those who try hard—to remove their footprint from the world.

I'm reminded of something former Village Voice music critic Robert Christgau once wrote in a review of the 1982 album by The Police, Ghost in the Machine, in response to the group's assessment of the human race as "spirits in the material world." While conceding that the group was part right, Christgau asserted, "We're also matter in the material world, which is where things get sticky." Just because we, as humans, can think on a higher plane than animals doesn't mean we can think or theorize or strategize our way out of impacting their lives, or fixing those lives as cleanly as we'd like, as Boyle's characters reluctantly learn.

That said, When the Killing's Done isn't as much about humans' tempest-tost plight as the literal tempests that toss his characters thrillingly and terrifyingly, beginning with the stunning storm story that opens the book. But it's something that characters on both sides of the conflict struggle with: Respect nature, control it, fight it, get out of its way, analyze it, assist it, restore it—whatever your plans may be, however well you've designed them, and however much your education or commitment may qualify you to make them, they'll always be limited because you're part of it, and everything you fail to take into account is part of it too.

The best way Boyle signifies this fact is the way he dramatizes each character's (except LaJoy's, whose adopted convictions are more pissed-off than principled) historical connection to the Channel islands. These are engrossing histories of adventure and pain, each in their own way linked or intersecting with the biological detritus of human presence on the islands. The opening chapter in particular, the tragic tale of Takesue's grandmother's shipwreck, is so real as to make reading it surreal: at once, you're utterly captivated by the story, and at the same time starstruck by how well this man writes a storm.

And though this new tale takes us to wonderful new places, those of us who know the thrill of a new T.C. Boyle novel have been here many times before.


Pre-order When the Killing's Done from Powell's Books!
Posted by Steve Nathans-Kelly at 11:28 AM No comments: